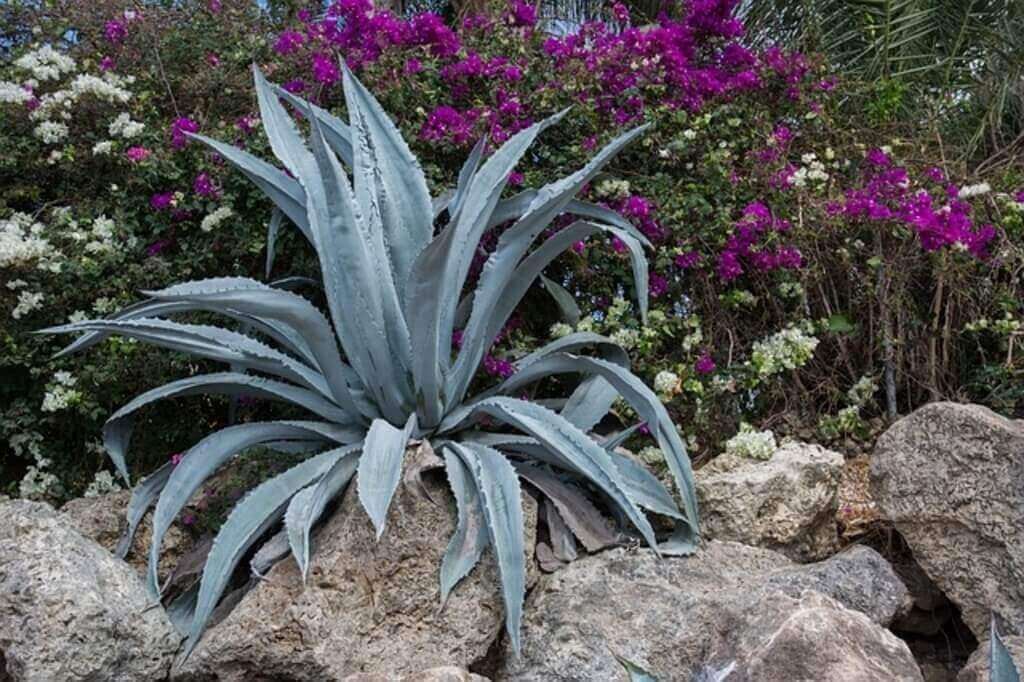 Agaves are not only beautiful plants, but they also have many uses and are incredibly useful for humans. You may even be surprised to find out some of these amazing facts!

Agave plants are native to Mexico and South America. They produce a sweet liquid called sap, which is tapped from the stem of the plant in order to create aguamiel. Aguamiel can be fermented into tequila or mezcal liquor, distilled into alcohol, or simply used as an ingredient for baking purposes.

The Agave Plant is related to Lilies, Amaryllis and Tulips.

Agave is a member of the Asparagaceae family, related to lilies, amaryllis and tulips. They are often grown as an ornamental plant because they can be used in flower arrangements or in landscaping.

Agave plants are leafy succulent perennial shrubs that are found in the deserts of Mexico and the southwestern United States. They thrive in hot, dry climates because they have fleshy leaves that store water and their waxy coating prevents moisture from evaporating.

Agave is Native to Central America and Mexico.

Agave is most common in central regions of North America (Mexico) and South America (Central American countries). They can be found in dry or desert areas because of their drought-resistant qualities.

Agave Can Take Up to 10 Years to Mature.

The Agave plant is a flowering succulent, which grows in the desert. It can take up to 10 years for the plant to mature before it will flower and produce fruit. Many people mistake this plant as cactus because of its thorny leaves that grow out from the base of the stem. When these plants are young they are often harvested for their juice, but once they become old enough to flower, then they have more uses than just being an ingredient in drinks.

Agaves are flowering plants that belong to the family Agavaceae. They grow in arid regions, and have large leaf rosettes with spiky teeth-like leaves. The leaves are often a vibrant green color, but can also be shades of red or brown when they start to die off.

Agave is a Diverse Plant With 270 Different Species.

The Agave plant is one of the most diverse plants in the world. There are 270 different species, and it can be found in a variety of climates, including hot and dry deserts to moist tropical forests.

The Agave Plant can Grow up to 20 feet tall.

The Agave plant is a succulent that can grow up to 20 feet tall, depending on the variety. The plant has one of the most varied flowering periods in the world, with flowers blooming from April through June.

Agave Grows from a Basal Rosette.

Agave is a genus of monocots in the family Asparagaceae. Agaves are succulent plants that have many uses. They grow from a basal rosette and most have long, linear leaves. Their flowering head grows from the center of this rosette. These flowers can be hermaphroditic or dioecious with their own set of male and female organs for reproduction purposes

Agave flower stalks are called inflorescences which grow up to 10 feet tall and produce yellow flowers. They are made of many tiny clusters that hang together from a single stalk.

The Agave plant has a strong symbolic meaning to Mexicans. The flower on the top of the plant symbolizes love and fidelity, while its roots represent a sign of stability in marriage. The plant is typically used as decoration for special occasions such as weddings or birthday parties, but they can also be found at more solemn events like funerals.

Aztec Warriors Used to Extract Sap from the Agave Plant.

The Aztec people used to extract sap from the Agave plant in order to create aguamiel (honey water), which they would then ferment into pulque, a fermented alcoholic beverage. This drink was consumed by Aztec warriors as well as the general population of Mexico before the Spanish conquest. The natives used a pole with a sharp edge that cut down through leaves and stalks and then scraped out chunks of sap, which were mixed with juice from various other plants.

The Agave Plant’s Spiky Leaves Protect It From Predators.

The Agave plant has spiky leaves that protect the plant from predators. The edges of the leaves are sharp and pointy, which makes it difficult for any animal to try and eat the plant. This also helps keep out animals such as rabbits, deer, coyotes, birds, rodents and other pests.

The Agave Plant Stores Water in the “Caudex” of Its Stem.

The Agave plant can survive without rain because they use their stored water to grow new roots and shoots. The  plants store their water in a central part of their stem called a “caudex.” The water is stored as sap that moves from the roots to the leaves. When it reaches the top, it’s then used for photosynthesis and keeping itself alive. This plant is able to store so much water because of its thick fleshy leaves which are able to collect more moisture than other plants.

Most species of Agave are monocarpic, meaning they die after flowering only once. The Agave life cycle starts with a shoot emerging from the center of the rosette of leaves. The shoot will grow for 2-4 years before sending up a tall stalk that blooms to produce large quantities of seeds. Once it has produced its flowers and seeds, it dies back down to ground level, where it sends out offsets (or pups) to start the process all over again.

Agave plants produce fibers that were used to make ropes, textiles and paper. The fiber was traditionally harvested by cutting the leaves off of the plant, drying them in the sun, and then scraping away at the pulp to remove thin strips of agave fiber from between layers of skin. The fibers can be spun into yarn or made into cloth.

Frost Damage in Agave Plants Can Be Fatal.

Frost damage in agave plants can be fatal. If an agave plant is exposed to frost, its leaves will turn brown and die back during winter months before new growth emerges in springtime. Frost damages the root system, which then stunts the plant’s ability to recover and grow after the first summer rains arrive. In some cases, it can even kill a plant if it’s exposed to freezing temperatures for too long of a period of time.

The Agave Plant Can Be Used as a Sugar Substitute.

These succulent plants can be used as a sugar substitute in cooking recipes like syrups, jams, candies, or ice cream toppings. The sap from an agave plant has a sweet taste that provides for great flavor without adding any extra calories or fat to your food. Agave is perfect for diabetics who want to keep their blood sugar levels low while enjoying treats on occasion.

All Parts of an Agave Plant are Edible, Including its Flowers.

All parts of an agave plant are edible, including its flowers. In fact, the flowers taste like a cross between asparagus and artichoke. The most common part of the agave plant that is eaten is called “piña” or pineapple in English because it tastes like a ripe pineapple when harvested at just the right time.

Tequila is Made From Blue Agave.

Blue Agave plants are found in different parts of Mexico and Guatemala, with many people believing that it originated in Mexico. The plant has a variety of colors depending on where it’s grown, which is why some think there may be more than one type or species. Blue Agaves are cooked for hours to extract their juices, which will then go through fermentation and distillation processes before being turned into an alcoholic drink.

You Can Grow Agave Plants From Seeds or Cuttings.

Agave plants are hardy succulents that can be grown from seeds or by cutting the stalk and planting it in soil. It grows best in full sun, although they will tolerate partial shade. They grow in dry climates, but will thrive almost anywhere as long as they get enough water.

Agave plants are typically grown outdoors because they need plenty of sunlight in order to thrive. If the plant is not getting enough sun, it will be shorter and produce fewer leaves than a healthy agave plant. It’s best to grow these plants where they can get at least 6 hours of sunlight per day and about 2-3 feet from any nearby structures that may block the light.

How fast do Agave plants grow?

An Agave plant will typically grow about two feet in height every year. This means it would take approximately ten years for an Agave plant to reach maturity or one meter in height.

How to use Agave plant?

The agave plant is an attractive succulent that has many uses. Some of the most common are as a food source, ornamental, textile, fertilizer, medicine, soap, detergent and for tequila production.

How long do Agave plants live?

The lifespan of an agave plant varies from species to species. The slowest growing varieties may take over a century to reach maturity, while the fastest growing varieties may only take three years. Agave americana is considered one of the longest-living plants in North America and can live for up to 30 years, or even longer if given optimal care.

How to maintain Agave plants?

Maintaining an Agave plant is not as hard as it may seem. -Provide plenty of sun -Water your agave at least once a week. -Fertilize it once every three months or so. -Allow one inch of soil to dry out before watering again, and be sure that the pot has plenty of drainage holes in the bottom to prevent root rot. -Keep it away from frost.

Is Agave healthier than honey?

Agave is a popular sugar substitute in recent years. Many people think that it’s healthier than honey because of its low glycemic index, but they are wrong. Agave has just as many calories and carbs as honey does, so agave isn’t any better for you than honey is.